I apologize profusely for not posting much earlier.  It's been a crazy whirlwind since I've arrived here, and things are finally settling down.  I'll start at the very beginning.. a very good place to start.  So The night before my flight to Europe I could barely sleep.  I deliberately stayed up late so that I'd actually sleep on the plane over to Amsterdam.  So I went to sleep around 3:00 AM and woke up only 3 hours later in total excitement.  It was the big day! ( Luckily I was at my folks' house as were my brother and grandfather, so I got to spend a lot of good time with my family before I headed out.)  Before I knew it, it was time to head to DFW Airport.  The folks and I crawled in the car, and my looooong trip to Spain had started.

After shedding a few tears saying bye to everyone (especially during my last hug with my folks) I got myself checked in and ready for the flight.  It left Dallas at 3:45 PM on September 26, and was scheduled to land at 8:00 AM in Amsterdam for a 12 hour layover.  I've been on quite a few trans-Atlantic flights in my day, and I'm still not used to them.  They are ALWAYS miserable.  Luckily the flight was severely undersold so I had the whole middle section of 4 seats all to myself.  So I downed 3 melatonin tabs and decided I'd try to take a nap during the 9+ hour trip.  So why the heck did I not sleep a wink?!  I put on slow instrumental music.  I watched boring movies.  I laid down.  I stared at the seat in front of me.  I did everything I could possibly do to knock myself out.  Didn't work.

SO I arrived in Amsterdam at 8:00 local time (1:00 AM Central time in the U.S.) on the same 3 hours of sleep I had the night before.  I had grand plans for my long layover in Amsterdam.  It was a 12 hour break between my two flights so I had plenty of time to take the train from Schiphol Airport to the center of Amsterdam. 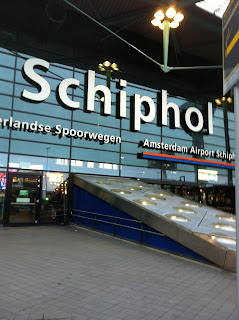 Outside of the airport

So I set out to conquer Amsterdam.  I took a lengthy (and somewhat boring) train ride to the central station.  On my phone was a list of places to visit in the city:  Anne Frank's house, Stadsschouwburg Theatre, HomoMonument, the floating flower market etc.  Well when I got off the train it suddenly hit me how tired I was.  I was dragging my sad carcass all over that city with very little energy. 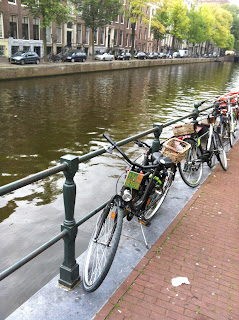 So I decided that I'd take a little break at the local Burger King (don't judge) because they had ample seating, easy selection and free wifi.  I got to text a little with my folks while I was there which made me feel so much better.  As homesick as one may get, a little contact with family and friends goes a long way.  I was so worn out that I decided to hit up one place on my list and head back to the airport.  So I headed to Stadsschouwburg Theatre just to check out the architecture.  It was absolutely beautiful.  They had a fun little shop downstairs that helped me pass a little time, but I was fading very quickly. 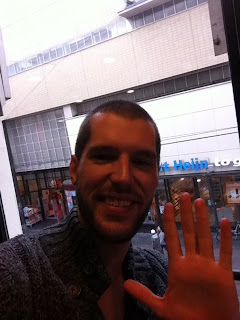 Me upstairs at BK in Amsterdam 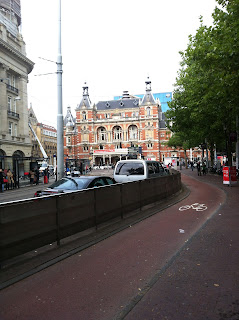 So headed back to the train station I felt like passing out.  With more than 6 hours to spare I crawled onto the train and headed back to the airport.  It was so relaxing to be checked in and sitting at my terminal.  I just passed the time until it was ready for the last little leg of my trip to Palma!
Posted by TXTyler at 5:25 AM